General Manager, Simon Scott, said providing funding to help those in Tonga is “First Credit Union’s way of supporting a community who supports us in their time of need and also answers the call from Hamilton Mayor Paula Southgate for Hamilton businesses to “get alongside” the Tongan community.

“What happened in Tonga is devasting and we especially feel for our members with family back home” he said. “First Credit Union as a financial co-op is built on ‘people helping people’ so it simply makes sense to make funds available. Among our 50,000 members we have a large Pasifika contingent. Some of our staff have also been personally affected with the devastation as they have family in Tonga.”

On FCU’s behalf the Waikato Tongan Community Trust will channel the funds in Tonga where they can be used most effectively. This includes having support containers shipped to Tonga with food for the local Tongan community as well as a broader community response. 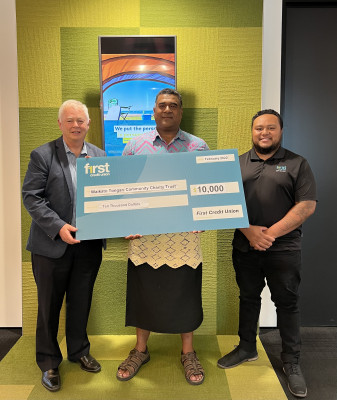 Mefi Naufahu, Chairperson for the Waikato Tongan Community Charity Trust, receives a $10,000 cheque towards providing assistance in Tonga from FCU Board Member and Hamilton City Councillor Rob Pascoe and FCU staff member Ben Tonga, who has family in Tonga.