“What is happening in Samoa is deeply concerning to us and most especially to our members with family in that country,” he said. “As an organisation that’s based on ‘people helping people’ it simply makes sense to make funds available to do what we can to help.”

“The team at K’aute Pasifika is best placed to get this money to where it will make the most impact on the ground in Samoa, and in particular, to those who are most vulnerable.”

On FCU’s behalf K’aute Pasifika will channel the funds in Samoa where they can be used most effectively. This would include medical supplies, supporting existing vaccination drives, those who are sick, and families of those in hospital or who have lost children. This would be done through established child health, outreach immunisation and other services.

FCU has chosen K’aute Pasifika because of links between the two organisations, and K’aute Pasifika’s ability to get things done under the leadership of their CEO Leaupepe Rachel Karalus. K’aute Pasifika is also focused on vaccinating unvaccinated children and priority group members locally through walk-ins, opportunities while delivering other services and small pop-pop clinics in Church or community settings.

The FCU donation coincides with a two-day general shutdown and mass immunisation programme by the Samoan government in the island nation.

First Credit Union has some 60,000 members across the Waikato and Bay of Plenty, including a large number of Pasifika. 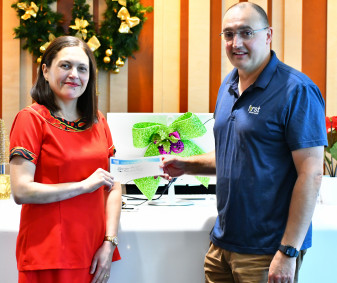